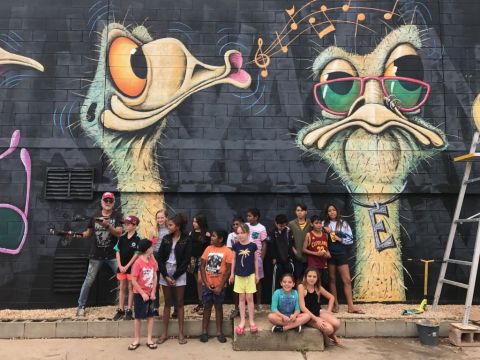 A feature mural painted with the assistance of local Lightning Ridge children and the town’s giant emu have been named among the best public art experiences in the nation.

‘2 Kool 4 Skool’ has been shortlisted for the 2021 Australian Street Art Awards’ Best External Mural gong* while ‘Stanley the Big Bird’ has been named a finalist in the Best Landmark Sculpture category. Both pieces are the creation of art doyen and local John Murray.

The Australian Street Art Awards, established in 2018, recognise destinations like Lightning Ridge that are using outdoor art to attract visitors, boost their economy and engage their community.

Awards Director Liz Rivers said, “The Awards inform travellers about the magnificent array of publicly-accessible art that can be found in every corner of the country and the communities that have invested in these attractions because they’re keen to welcome visitors”.

She said smart communities promote their street and outdoor art as a unique landmark – an attraction that visitors can see in only one place - and that makes their destination immediately identifiable, highly attractive and a drawcard for art-loving tourists.

“Investing in outdoor art as a visitor attraction is also clever economics, as the art is typically less expensive to create than more traditional tourism attractions and the pay-off is handsome,” Ms Rivers said.

Arts tourists from within Australia are high value visitors – they stay 42.8% longer and spend 55.9% more when travelling than domestic tourists overall, according to an Australia Council for the Arts’ Domestic Art Tourism: Connecting the Country Report.

“Being shortlisted in the Awards further cements Lightning Ridge’s reputation as an aspirational destination for everyone who loves to discover visually stunning experiences,” Ms Rivers said.

With rigorous judging by tourism leaders, plus second-tier auditing and due diligence, ‘2 Kool 4 Skool’ and ‘Stanley the Big Bird’s dual finalist success has the credence of the tourism sector.

Standing sentinel on the southern edge of Lightning Ridge is 18-metre-tall steel ‘Stanley the Big Bird’. Emus hold a significant place in the lives of Aboriginal people and this one from scrap metal is John Murray’s acknowledgement of this truth.

Turning into the main street visitors will then find a vibrant mural of whimsical characters bursting with colour right in the heart of Lightning Ridge. Alongside the stylized emu heads for which the artist has become famous are handprints of dozens of local children – an inclusion that has imbued the whole town with a sense of pride and ownership.

The judges said, “While both these pieces are impressive, it’s the inclusive way in which ‘2 Kool 4 Skool’ evolved with assistance from children that makes the artwork truly unique. We love that John Murray is determined to continue playing an active role in furnishing northwest New South Wales with numerous public art attractions that are promoting the outback and bringing in visitors.”

The winners in all 11 Australian Street Art Awards categories will be announced as part of an online celebration on 4 March.

* This is the second year in which a John Murray mural has been recognised.